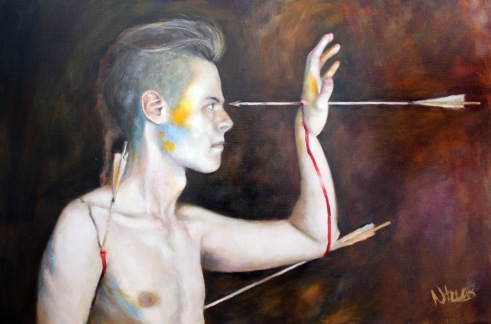 This figure is set in a dark and turbulent surrounding and seems to be facing down an unseen oppressor, having taken three arrows to the body in the process.

The fairly androgynous figure, naked and seemingly primitive through his tribal appearance, is an examination of the ideal of human strength in defiance. This is reminiscent of the Indian victory over British rule in the early twentieth century or the iconic lone figure standing up against a column of tanks in Tienanmen Square. Rather than standing defiant through what would be traditionally seen as masculine physicality, violence and strength, this figure has withstood two blows and has halted the third killing blow with the simple raised hand  gesture of ‘stop’, or ‘no further’. In this way the figure is displaying a different strength than is normally associated with the masculine ‘Hero’ archetype, simply the will to stand unprotected against brutality.

The piece is also slightly reminiscent of depictions of the crucifixion, with the piercing wounds to the body and in particular the hand. This connotation of selflessness and sacrifice again points to the heroism of the figure.

This piece in particular shows a non-realistic use of colour, principally through the figure’s face and hand. This is intended to add life and vibrancy to the figure, as well as drawing the viewer’s eye to the area between the two patches of colour, containing the focal point of the arrow head and the figure’s eye.

The images on this website are not be used without permission