The premise behind this piece is an examination of the role that excesses in wealth and technology play as symbols of power.

Everything in this piece suggests power, wealth and even divinity. This latter point in particular is communicated though the papal/ saintly hand position and halo common in Christian art, and the presence of extra limbs, a feature of divinity in a number of Asian religions.

This is compounded by overly extravagant gold apparel and the extraneous (and ultimately pointless) nature of the hi-tech prosthetic limbs. Even the inlaid Japanese text on the harness reads ‘Titan’ as if to labour the point of the adornments.

Dripping with gold and technology and hidden behind a grimacing warrior’s mask, the figure looks imposing initially. On closer examination however, it is worth noticing the subject himself looks pale and physically unimpressive.

In this way the over-reliance on wealth and possession of technology common in many cultures can be seen as a fundamentally flawed pursuit, serving only as a distraction from whatever may lie beneath it all.

This figure is set in a dark and turbulent surrounding and seems to be facing down an unseen oppressor, having taken three arrows to the body in the process.

The fairly androgynous figure, naked and seemingly primitive through his tribal appearance, is an examination of the ideal of human strength in defiance. This is reminiscent of the Indian victory over British rule in the early twentieth century or the iconic lone figure standing up against a column of tanks in Tienanmen Square. Rather than standing defiant through what would be traditionally seen as masculine physicality, violence and strength, this figure has withstood two blows and has halted the third killing blow with the simple raised hand  gesture of ‘stop’, or ‘no further’. In this way the figure is displaying a different strength than is normally associated with the masculine ‘Hero’ archetype, simply the will to stand unprotected against brutality.

The piece is also slightly reminiscent of depictions of the crucifixion, with the piercing wounds to the body and in particular the hand. This connotation of selflessness and sacrifice again points to the heroism of the figure.

This piece in particular shows a non-realistic use of colour, principally through the figure’s face and hand. This is intended to add life and vibrancy to the figure, as well as drawing the viewer’s eye to the area between the two patches of colour, containing the focal point of the arrow head and the figure’s eye.

The most startling feature of this subject is that he appears to have a shell of dull, rusted metal covering the majority of his body, creeping over his face to leave only a small portion of skin left exposed. There can be no doubt that rather than a statue, this is a human being in a state of change.

The metal is a symbolic construct, intended to show the darker, destructive side to the ‘Iron Man’ as a cultural concept. Rather than being an indefatigable figure, possessing true grit, as may be true of individuals described as ‘iron men’, this subject is closing off from the outside world behind an impenetrable shell.

This is behavior often associated with the traditionally masculine. Not allowing vulnerabilities to be exposed, whether they are emotional or physical, is a common trait of the masculine as a need to express oneself in any capacity may be viewed as weakness. In this piece then, the shell the subject has raised by keeping himself from the viewer is all consuming and corrosive. Its jagged edges and unbending nature cause the subject to seize up and make him crumble. This ‘Iron Man’ is destroying himself through the very method he would use to protect himself, illustrating a self-destructive behavior common in the masculine psyche.

This is the fourth piece in the ‘Hunter’ series, examining traditional views of masculinity. In a slight departure from the other pieces in the series, the use of grand warrior adornments has been kept to a relative minimum. Instead the focus is on the subject’s extremely aggressive expression and body language, bathed in dominating shadow, and the fluorescent war paint contrasting with this darkness.

Through the use of the lurid war paint and the sword, we can see that this individual is presented as a warrior to be feared, but this is betrayed as we are lead around the piece. While the designs of the war paint start with chevron scars and similar banding, they soon morph into the child-like and cute bunny rabbit designs.

In a fashion similar to the other pieces in the ‘Hunter’ series, the very adornments that bring up traditional notions of masculinity have been worked to have precisely the opposite effect, revealing these notions as perhaps superficial and even themselves childish. 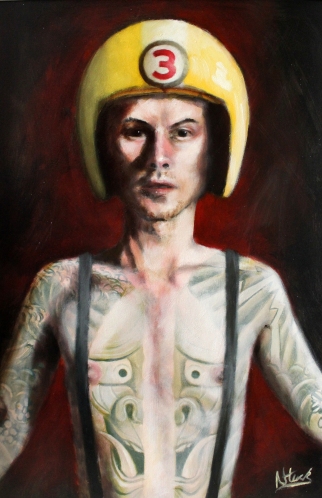 This piece is the third in a series of Hunter pieces, specifically examining traditional views of masculinity. This piece is a modern take on war paint, warrior headdress and aggressive posturing which, rather than coming together to make the subject look powerful or strong, clash and look comical or childish.

The subject in this piece appears at first glance to be a stoic tribal or ancient warrior, protected by a battered and brightly adorned armoured mask and with a trophy fur making him reminiscent of a Roman Centurion. The dramatic composition and costuming are effectively subverted however by the warrior’s choice of totem for his headdress. Where we might expect to see a wolf or lion’s head, we see a rubber duck instead.

This device attempts to show the viewer that the traditionally masculine adornments/ behaviors we might accept culturally may more often than not be superficial and even foolish if we allowed ourselves to view them from a truly objective vantage. 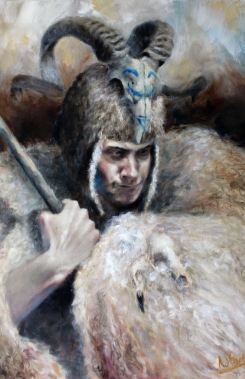 Following the theme in my work of examining cultural archetypal images, this piece’s subject is outwardly representative of the ‘warrior’.

Representing a hunter, warrior or god of war, this subject is draped in the finery of his conquests, animal furs and skulls are testament to this subject’s prowess.

This is betrayed however by the expression on the subject’s face. He is clearly appalled with the trophies he sees around him, his face contorted, his hand gripping the spear intensely as he teeters on the edge of tears.

This again seems to be counteracted by the blue face totem decorating the ram’s skull headdress. The grin here could be seen as the victims of the hunter being given a small justice in his suffering, or as the face that the hunter himself puts on, to sit over and disguise his anguish.

This representation of the warrior could be seen then as more an examination of the nature of masculinity, common across many cultures. While the traditional superficial appearance of the masculine is often one of unassailable strength and might, what lies beneath is only human, with all its flaws and anxieties.

Titan is one of the very earliest of the animals that I used in exploring cultural archetypes, in this case, exploring the ‘trickster’.

While he does not look especially mischievous as compared to other cultural tricksters such as Loki in Norse Mythology or Aite in Greek Mythology, the ‘trickster’ quality with Titan is rooted simply in how he has been presented to the viewer.

Titan is presented as another human would be and because he is face to face with the viewer, a connection can be made with him through the eyes and his expression. Even the position Titan has been given is reminiscent of how a human might be presented in a portrait, in an upright position and with one hand (or paw) across himself as if to suggest absent fidgeting of a human subject in thought.

In this way Titan is a trickster as he is trying to be human, mugging the way which humanity tends to strive to be more than mortal.

It’s been a while since we’ve been able to make any significant updates to the website (babies, house!).

We’ve removed a few pages and added this new blog page where I will be posting my latest news and articles about my work.  The next set of articles I will post, will give a bit more information about my pieces.

We hope that this will work better in the future!

The images on this website are not be used without permission